Human rights attorney Amal Clooney sharply condemned President Trump for posing a threat to journalists around the world in her speech at the United Nations Correspondents Association Awards on Wednesday night in New York City. Proving yet again that “wife of George” is hardly her only claim to fame, Clooney, who was being honored as the UNCA Global Citizen of the Year, said the president’s harsh rhetoric about the media has helped lead to reporters being “under attack,” particularly in “autocratic regimes from North Korea to the Philippines to Hungary.”

“The U.S. president has given such regimes a green light and labeled the press in this country the ‘enemy of the people,’” Clooney said. The president’s words, along with other international instances, have had a “chilling effect” on the press, she continued, not to mention deadly consequences—look no further than the murder of Washington Post journalist Jamal Khashoggi, likely at the hands of Saudi Arabian operatives. Khashoggi “walked into a consulate in Istanbul and was brutally tortured to death,” Clooney said in a video posted by Reuters U.N. bureau chief Michelle Nichols. 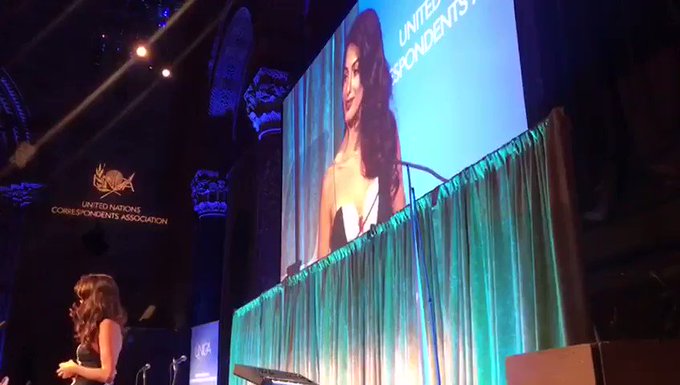 It’s not the first time Clooney has had choice words for Trump. At the Pennsylvania Conference for Women in Philadelphia in October, she appropriately called him out for mocking Christine Blasey Ford at a rally. “The president of a country should not publicly ridicule a woman who has come forward to allege abuse,” Clooney said then. She and her husband have also frequently put their money where their mouths are, donating huge sums to human rights organizations and causes that counter Trump’s policies, whether they be immigrant children’s rights or the March for Our Lives led by the teenage Parkland shooting survivors.

Written By
Lisa Beard
More from Lisa Beard
We have questions. Scrolling through social media’s got us like… How does...
Read More