Of all things, joy… This is what Tarana Burke — the Bronx-born activist and architect of the ‘Me Too’ movement — wants for us: the daughters and mothers and aunties and friends who suffer sexual violence. Back in 2006 she dedicated her life to helping sexual assault survivors in marginalized communities get the services, support and encouragement they need to move past sexual trauma and heal.

The chords she struck were wrapped in a simple but radical concept: Instead of seeking punishment of the perpetrator and retribution, focusing on commiseration with and empathy for the victim are two of the most powerful tools to help survivors of rape, incest, sexual assault and sexual harassment pull themselves out of the darkness and look toward the sun. What survivors need most, Burke insisted, is to know that they are inherently good and that they deserve to be happy. That joy comes in the mourning — and in the morning.

For the longest time, few danced to Burke’s tune. The advocacy organization she cofounded, Just Be, Inc., through which she launched the ‘Me Too’ mantra, was playing mostly to a crowd that was already intimately involved in assisting survivors. She recalls having to practically beg to be part of programs that would help her reach the women and girls who weren’t part of the choir—specifically poor Black women and girls.

In Burke’s Harlem apartment rests a box of letters she personally penned in 2007 to celebrity sexual abuse survivors — Queen Latifah, Mary J. Blige, Gabrielle Union, Fantasia, Missy Elliott — requesting their help to engage with young girls who look up to them and need to hear how the stars ultimately triumphed over the devastation of their assaults. Support was scarce — critical funding needed to underwrite her work was nearly nonexistent. Burke kept singing that Black girl’s song, even though it seemed no one was listening.

But what a difference a hashtag makes. In the past year ‘Me Too’ became both lightning rod and rallying cry when actress Alyssa Milano, responding to bombshell allegations that storied Hollywood producer Harvey Weinstein had sexually assaulted and harassed a roster of movie starlets, took to Twitter to encourage followers to retweet her status with #MeToo if they’d ever experienced sexual harassment or assault. Within days more than 12 million people had used the hashtag or liked or commented on #MeToo posts across Facebook and Twitter, with Milano being credited with starting the conversation. 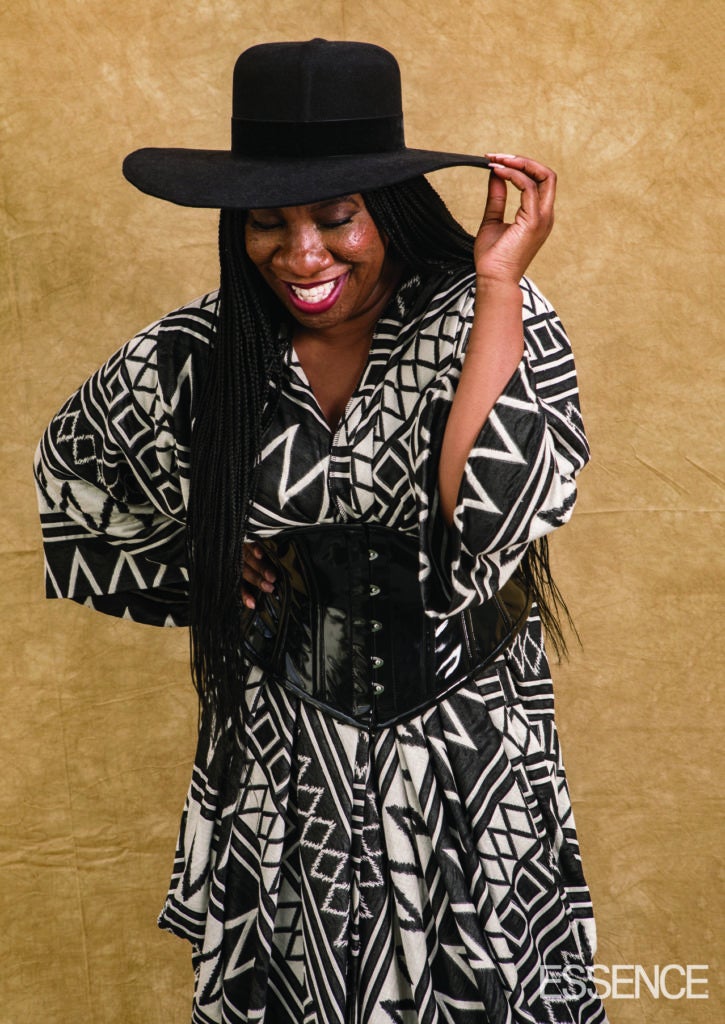 But Black women who knew of Burke’s work were quick to tap Milano on her social media shoulder, demanding that the former sitcom star acknowledge that Burke had been propelling the ‘Me Too’ conversation for a decade prior.

Soon Burke became the face of an international dialogue that traversed social media and entered the halls of everywhere from the pulpit to the boardroom to schools and universities to Congress and right on up to the presidency. Some of the same celebrities whose stories Burke had used in her Just Be, Inc., workshops were now praising her as she took her message to spaces she’d never imagined inhabiting — the Oscars and Golden Globes; Times Square on New Year’s Eve; and Time magazine’s 2017 Person of the Year edition, in which she was featured in the cover story.

“Tarana will continue to do this work, but the stage will be bigger and the microphone turned all the way up,” Gabrielle Union wrote in Time’s 2018 100 Most Influential People issue about Burke’s right here, right now activism. “She’s not even going to bring more seats to the table — she’s going to turn the table over and build a new one.”

Burke is still a bit shell-shocked by all the attention and by the confirmation that her idea, her work and her passion has taken flight. She admits that some days she struggles with imposter syndrome, wondering, Am I the right person? “It’s a weird feeling,” she says. “I struggle with this — the anxiety of, Who gets to do the things that they want to do? That doesn’t really happen for us.” Except now it does. That Black girl’s song Burke has been singing for oh, so long is being played at full blast. Finally, hips are swaying to her rhythm.

Burke’s passion is deeply personal. The 45-year-old mom of one daughter, Kaia, Burke herself is a survivor of sexual assaults committed against her at age 6, between the ages of 9 and 12, and again at 25. Though she does not publicly detail the abuse, she did share with ESSENCE that the repeated attacks stole her ability to believe that she was inherently a good person who was capable of being happy.

“It wasn’t until she gave birth to her daughter that she did the deep personal work necessary to find joy, to feel as though her life is worth something. to truly believe that she matters.”

It would be Angelou’s recitation of her extraordinary poem “Phenomenal Woman” that helped a teenage Burke evolve in how she processed her repeated abuse. “I was like, Well, if she believes she’s a phenomenal woman after being raped as a child, then how do you get to that? ” recalls Burke. “I thought, If I can figure this out, I’m going to be fine.” In -pursuit of an answer, she wrote in her journal a profound question: “How does a body that holds pain also hold joy?”

Still, even as she was developing ‘Me Too,’ Burke says she still felt “useless.” She thought, At least I can save some other girl because it’s too late for me. It wasn’t until she gave birth to her daughter, Kaia, that she did the deep personal work necessary to find that joy — to feel as though her life is worth something. To truly believe that she matters.

“I started by writing down all the times that I felt happy or joyful or felt some sense of wholeness,” she says. For example, her daughter jumping in her arms and screaming, “Mommy!” Laughing with friends. Fresh braids. “I curated the joy that I had,” she remembers. “I realized I needed to acknowledge it and call it what it was and revel in it, even if it didn’t look like what television and books told me my personal joy should look like. It was mine.”

It is not lost on Burke that everything she experienced is directly connected — her abuse, her trauma, her healing, her advocacy on behalf of other women — to this moment in the ‘Me Too’ movement. The thought brings her to tears. “I definitely see how God works,” she says.

At this very public stage of her life, Burke is preparing to move to a more secure home. Seeking safety is no overreach: Since becoming the face of ‘Me Too,’ she has been confronted at speaking engagements, chased down the street by both admirers and foes, and had hate mail from strangers show up at her front door, including an empty box she feared might be a bomb. Her outspokenness about convicted sexual predator Bill Cosby has earned her the righteous indignation of his supporters — Black people in particular —n and threats too. Precautions must be taken.

“Burke had a simple but radical concept: commiseration with and empathy for the victim are powerful tools to help sexual assault survivors pull themselves out of darkness and look toward the sun.”

The comments she’s received from some Black men are especially hurtful. “The number one thing that Black men say to me is, ‘Nobody sexually harassed your ugly ass. Who would want to have sex with you?’ ” says Burke. “I’ve had to recalibrate, because I was just kind of going along in my regular joyful-ass life,” she says. “I wish that Black men could feel about me the way I feel about them. I wish they would understand that I’m not attacking them.”

Meanwhile, her advocacy work still needs to get done. Indeed, Burke has partnered with The New York Women’s Foundation to raise $25 million to award grants to organizations focused on ending sexual violence. So far she has raised $1 million.

She has also received $100,000 each from Billie Jean King and Robin Roberts toward her work to combat sexual violence. In addition, Burke has a Web site (metoomvmt.org) that provides resources for survivors of sexual violence. Another one of her projects is creating leadership training programs for activists who want to effect change in their communities through legislation or the establishment of crisis centers and “healing circles”— safe places where survivors can share their stories and get whole.

In the meantime, Burke continues the work of getting herself whole, too.
As she discusses her healing with ESSENCE, Burke receives a phone call from poet and playwright Ntozake Shange, author of For Colored Girls Who Have Considered Suicide/When the Rainbow Is Enuf. The series of poems includes Burke’s favorite text, “Dark Phrases,” in which the Lady in Brown character insists that “somebody, anybody, sing a Black girl’s song….”

Burke is blown away. Shange is her hero and Burke said as much at the 2018 AfroPunk Fest in Brooklyn. When asked why she kept centering the ‘Me Too’ movement on Black women and girls, Burke credited Shange (who was in the audience) with imploring that we all “sing a Black girl’s song.”

“I feel like those were marching orders,” Burke recalls saying. “If I don’t sing our song, then who will?”

Sing on, sister. Sing our song.

Written By
Lisa Beard
More from Lisa Beard
We have questions. Scrolling through social media’s got us like… How does...
Read More